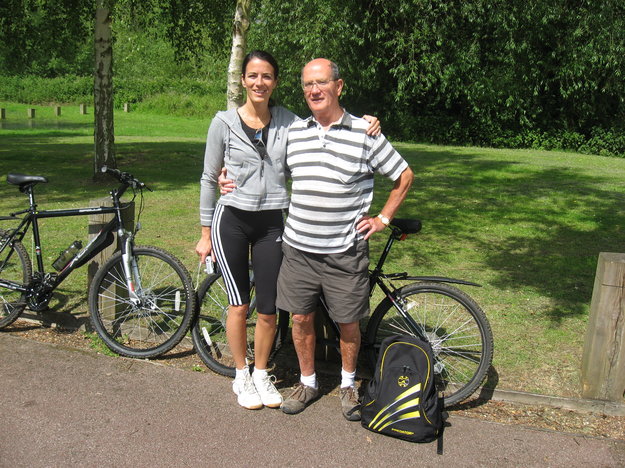 We recently caught up with Jules’s Dad Mick who is 84. After a lifetime of keeping himself fit through many activities, from cycling to football,  he continues to stay in tip top condition – so we thought we’d ask him the secret of a long healthy life.

Mick told us that as a young lad he had always been a keen footballer and played in school teams and later on in pub teams. He even played every Sunday on the hallowed pitches of Hackney Marshes. A bad foot injury forced him to look for another sport to keep fit and this led him to cycling.

His cycling years started at the same time he was in the national service stationed at Duxford. Every time he was given leave he would cycle the 70 miles back home to London. This led to him taking part in semi pro cycling races around the country and creating lifelong friendships – all enjoying cycling holidays together. He moved on to time trials and would even train with bricks in his saddle bag!

Mick has also always prided himself on eating healthily down the years and always eats his 5 a day and drinks only in moderation. This has meant that when he felt too old for football and cycling he has become a keen walker and tries to cover at least five miles a day even in winter.

He briefly returned to cycling in his seventies when Jules bought him a bike for Christmas and she now helps with some basic exercises to keep him supple. In fact, she is pretty convinced that his squat is the best she has seen and simply remarkable for someone who is 84!

If you would like Jules or any members of her team to help you reach peak fitness like Mick, please get in touch if you live in Bedfordshire, Buckinghamshire or Northamptonshire.