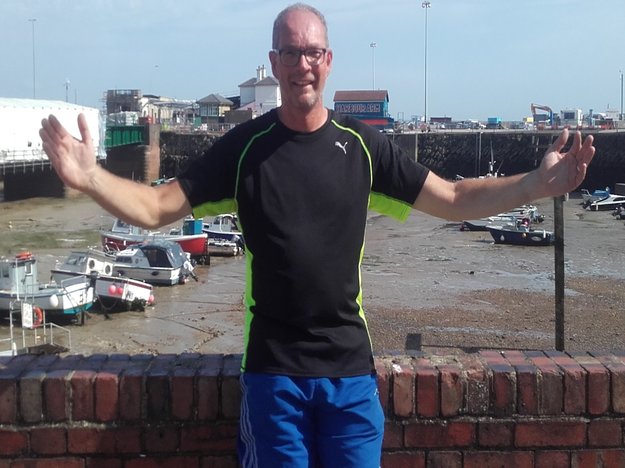 So, we have now reached the half way stage of our marathon training programme with the start line in New York only seven short weeks away! Scary and exhilarating in equal measure.

The half-way point was met full on last week when we participated in the Two Arms on Two Legs half marathon course in Aylesbury. It was a tough course, less because of the 13.1 miles and more because of the tough terrain. Running along canal banks and narrow tracks is very different to the tarmac of New York’s streets, but all practice is good.

The good news is that we didn’t struggle with the distance and the hydration and nutrition seemed pretty much spot on in Jules’s capable hands. (I was allowed a carefully controlled stream of jelly babies on route!)

I was disappointed with my speed but have the time to work on that, now I know the distances don’t intimidate me. Jules is now concentrating on the length of my stride and making sure my heels come up properly so that I avoid the “Martin shuffle”. Well, as she says, if you double the length of your stride then essentially your time on the streets of New York will be halved., It’s a simple but effective mantra that I am trying to drill into my head.

It was also great to have her running next to me to “coax” me on to a better performance for the whole race. On November 5th, I will be alone apart from 2 million fans as I race through 5 boroughs of the Big Apple. I have heard that the roar form the crowd can literally get you round the course. I will be allowing for this extra lift as I am sure every runner is on the day.

Jules has somehow turned me into a potential marathon runner in a matter of weeks and so if you live in Bedfordshire, Buckinghamshire or Northamptonshire and are considering your own long distance event, (whether it’s running, a triathlon or a tough muddder) give her a call and she’ll transform your form too!